In July 2022, there has been an increase in number of people detained during trials in political cases, including section 112 cases. It is also necessary to monitor court decisions for many ongoing trials. Meanwhile, police have pressed additional charges against protesters of the Din Daeng protests in 2021 for the violation of the Emergency Decree.

According to the TLHR statistics, at least 1,843 of the 1,108 cases have been prosecuted due to political participation and expression since the beginning of the “Free Youth” protest on 18 July 2020 until 31 July 2022. This number includes 282 youths who are under 18 years old.

Compared to the statistics at the end of June 2022, 11 more people have now been prosecuted this month in 13 cases (only counting those never been charged before).

If we also count those who have been charged in previous multiple cases, we would find that there would be at least 3,671 incidents of persecution in total.

The prosecution can be grouped according the following charges:

1. The “royal defamation” charge under Section 112 of the Penal Code involves at least 208 individuals in 224 cases.

2. The “sedition” charge under Section 116 of the Penal Code involves at least 126 individuals in 39 cases.

3. Charges of violation of the Emergency Decree involve at least 1,465 people in 645 cases (since May 2020 when the first legal action against political protesters and activists was initiated).

4. Charges under the Public Assembly Act involve at least 107 people in 75 cases.

5. Charges under the Computer Crime Act involve at least 140 people in 160 cases.

Out of the mentioned 1,108 cases, 210 have already been concluded, mostly with the accused agreeing to fines at the police level or the court. This number includes 21 cases that were not indicted by the public prosecutors.

The development of the political prosecution in July 2022 also exhibits the following pattern:

Section 112 case situation is still heavily used with at least 6 new cases. The trend of court decisions is worrisome.

In July, the number of the people accused/prosecuted of Section 112 has increased to at least 208 in 224 cases, with 5 new people in 6 cases this month. Among this number are 17 youths.

An important case last month was that of Chinnawat Chankrachang, who was accused of giving a speech, demanding the right to bail for political detainees in front of the Bangkok South Criminal Court on 28 July 2022. This 7th lèse majesté charge was filed by a member of the Center for People Protecting the Monarchy (CPPM). Chinnawat was arrested without a preceding summon warrant. Later, he rejected the court’s mandate by refusing to apply for bail and was thus transferred to a prison for detention.

There was the case of Pornchai “Sam” Yuanyee, who was arrested and accused of setting fire to a royal ceremonial arch during a protest on 19 September 2021. His bail application was rejected. As such, at least 4 people are currently under detention during the trial as of the beginning of August.

There was also the case of “Tum”, who was accused of being the drawer of cartoons on the “Kon Glom Kon Liam” and sharing four cartoon images deemed violating the Section 112, and the case of Weha, who was accused in their third lèse majesté case for posting texts about the court decision about the “GuKult” page case. Both cases have been filed by members of the CPPM as well.

Furthermore, there was the case of “Bell”, a 17-year-old from Phatthalung, who was additionally accused of an event taking place in August 2020, where a group of activists went around to take pictures of Phatthalung City and posted political texts on the Facebook pages “Free Phatthalung” and “Democracy of Southern Thailand”. Bell’s case proceeded separately as a juvenile case.

It is important to monitor the trend of the court proceedings, both in terms of the ongoing trials as well as court decisions. Particularly, the decisions by the Court of First Instance that have been rolling out in cases citizens filed with the police in various provinces. In July, there was the case of Meechai, who shared a post questioning the monarchy’s spending of taxpayers’ money and was found guilty by the Samutprakan Provincial Court. Meechai was sentenced to a 4-year jail term, which was commuted to 2 years and 8 months for testifying in favor of the case.

There was the case of Udom, who posted seven texts, two of which the Narathiwas Provincial Court deemed offensive. His given imprisonment sentence of 6-year term was reduced to four owing to a favorable testimony. The court reasoned that the other texts did not fall into the scope of the royal defamation offence because they alluded to the late King Rama IX, who was no longer protected by the law after his passing.

While the last two cases managed to get bail during the appeal process, there were limitations in the litigation process. Moreover, the underlying ideology reflected in the pattern of court judgment poses a concern for the ongoing cases awaiting witness examination.

The direction of the Emergency Decree cases is split into two, while the Din Daeng protests in 2021 receive new charges.

Police have filed additional charges of the violation of the Emergency Decree against protesters and observers of the Din Daeng protests that took place last year. These included “Pichai”, a detainee from the ThaluGas group who was accused by the police while in the prison with two more cases for protesting in September and October 2021, and “Paan ThaluFah”, who was also accused of the Emergency Decree violation in one case for observing the protest in Din Daeng on 2 October 2021.

Meanwhile, the court has further dismissed four Emergency Decree cases related to protests, including the Lamphun protest case, two car mob cases in Nakhon Ratchasima, and the Maha Sarakam protest case. Overall, the court held that the protests contained no risk of transmission, occurred peacefully, and were an exercise of a constitutional right.

Refer to statistics >> The Emergency Decree cases dismissed by the court or not indicted by the public prosecutors.

On the contrary, there are cases in Bangkok in which courts ruled in a different direction, though this still constitutes a minority compared to the previously mentioned tendency. Such cases include the #SaveWanchalerm case, where the Pathum Wan District Court found “Penguin” and “Ua” guilty. The court reasoned that it was not necessary to consider whether the circumstances of the protest were in line with the disease prevention measures, took place in a crowded space, or created unrest, or the Emergency Decree would have been otherwise rendered unenforceable. The defendants were deemed guilty simply by the act of participating.

This trend of court decisions showcased the difficulty in weighing and ruling between the constitutional right to protest and the need of disease prevention in different settings. It is difficult to discern whether or not disease control measures were used as a reason to arrest and charge protestors or to prevent the spread of diseases. This is also due to the varying nature and format of protests as well as intensity of the COVID-19 outbreaks.

Independent media was accused of contempt of court for live-broadcasting in front of the court.

A new case of contempt of court also emerged last month. The director of the Bangkok South Criminal Court filed a case against Paradon Ketphueak – civil journalist and owner of the Facebook Page “ลุงดร เกตุเผือก (Lungdon Ketphueak)” – accusing him of setting up a camera for live-broadcasting near a court exit gate to report on the appointment of “Bung and Baipor”, who were summoned to the court for evidence examination and reading of the bail decision on 18 July 2022.

Paradon insisted that he was an independent news reporter and had no intention to disrespect the court. He had live-broadcasted events at both this court and other courts many times, but never been warned by justice police or security personnel. Moreover, there were no signs displaying court regulations with regards to live-broadcast at this court.

This case requires follow-ups in terms of the trial and decision as to why live-broadcasting in front of the court, not inside the courtroom, was considered an inappropriate conduct or disrupting the trial, which could be deemed a contempt offence.

Political Cases in 2022: 3 Cases Heard in Closed Trials, No Notetaking Allowed in 11 Cases, Court Whittled Witness List and Did Not Issued Subpoenas in Lèse-majesté Cases 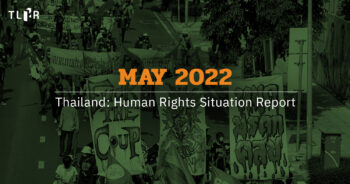 In June 2022, politically-motivated prosecutions remain intense. The number of those prosecuted under Section 112 (lèse-majesté) now exceeds 200. Meanwhile, there has been an increase in arbitrary detentions of those charged with lèse-majesté and other offenses related to the “Thalu Gas” demonstrations, resulting in over 22 individuals being detained pending trials.  Based on TLHR’s documentation […]