On 10 July 2016, 11.30, police officials from the Ban Pong Police Station, Ratchaburi province, searched the vehicle of Mr. Pakorn Areekul, aka “Man”, an activist of the New Democracy Movement (NDM) and found document entitled ‘Reasons against the Draft Constitution’, ‘Vote No’ stickers, and some other document related to the 7 August constitution referendum which included some fliers of the Election Commission of Thailand (ECT). Mr. Pakorn, along with Mr. Anan Loket and Mr. Anucha Rungmorakot, his fellow NDM activists as well as Mr. Thaweesak Kerdpokha, a reporter from Prachatai news outlet, who were about to broad the vehicle, were then summoned for questioning. Pakorn and his activist friends had gone to the police station to give moral support to some residents in Ban Pong District who reported themselves to police for charges of violating a ban on political gathering as as a result of their opening a referendum monitoring center. Thaweesak, the reporter, was there to cover the news. He was also interrogated, despite identifying himself with press ID card.

Article 61 of the Constitution Referendum Act states that

“any person who commits following acts; (1) to cause confusion to affect orderliness of voting,

Anyone who publicizes text, images or sound, through either newspaper, radio, television, electronic media or other channels, that is either untruthful, harsh, offensive, rude, inciting or threatening, with the intention that voters will either not exercise their right to vote, or vote in a certain way, or not vote, shall be considered as a person causing confusion to affect orderliness of voting.

If the offences are committed by a group of five persons or more, each person shall be punished with imprisonment of one to ten years, a fine from 20,000 to 200,000 Baht and a 10-year revocation of voting right by court.”

Initially, the officials did not press any charges against the three activists and a reporter and simply informed them that police had to put the information into the police daily record and had to seize the document. But later, around 12.00, the police informed them that they had just sent the information of document found in their car to the Provincial Election Commission and local military authorities for review and comments. During the initial questioning, Mr. Thaweesak revealed that the officials tries to establish that Prachatai news outlet has been the funder behind the NDM campaign, including giving the activists money to print the materials to campaign against the Draft Constitution.

Reportedly, the Deputy Superintendent of Ban Pong Police Station had made the phone call to the Election Commissioner on electoral affairs, Mr. Somchai Srisutthiyakorn, who informed the police that if the document was simply in the possession and not yet distributed, the activists could not be held accountable. But if they had distributed them, whether it would violate the Head of the NCPO Order No. 3/2015 (ban on political gathering of five persons) or not, this would be subject to the discretion of the police on a case by case basis. Nevertheless, according to the police, the Commander of the Provincial Police Region 7 insisted that the act could be actionable as the activists were getting prepared to distribute the material and they have decided to press charges relating to the Constitutional Referendum Act’s Section 61, paragraph two against them. Mr. Somchai also added that the Constitutional Drafting Committee (CDC) was still reviewing the referendum campaign material of the NDM, but insofar could not determine if by simply having them in possession would constitute an offence or not.

In the Police Arrest Memo, the police noted that around 11.00, the arresting police had received a report from people who acted in good faith and through the police scanner of the Ban Pong Police Station that a group of individuals were driving a pickup truck and carrying with them some document and materials in the back of the truck. From their behavior, it was believed that they were to distribute the document, the fliers, and brochures to campaign against the vote to endorse the Draft Constitution in Ban Pong District. From further investigation, it was found that the vehicle had pulled over on Songphon Road, Ban Pong Municipality, Tambon Ban Pong, Ratchaburi. The officials have thus identify themselves and asked to search the vehicle.

From the search, the evidence were recovered, and from asking Mr. Pakorn Areekul, they have learned that he had travelled there with Mr. Thaweesak Kerdpokha, Mr. Anan Loket and Mr. Anucha Rungmorakot in order to visit their friends who have been summoned in the case of the unlawful assembly of five persons and upward or a political gathering without permission and to run the campaign about the Draft Constitution. Regarding the evidence, Mr. Pakorn accepted that they belonged to the New Democracy Movement (NDM) and they had been loaded into his vehicle.

The officials have thus seized the evidence and informed the arrestees of the charge against them for “having publicising text, images or sound, through either newspaper, radio, television, electronic media or other channels, that is either untruthful, harsh, offensive, rude, inciting or threatening, with the intention that voters will either not exercise their right to vote, or vote in a certain way, or not vote, shall be considered as a person causing confusion to affect orderliness of voting“, which is an offence of the Constitutional Referendum Act’s Section 61 paragraph two.

The four suspects pleaded not guilty to the charge and refused to sign their names in the Arrest Memo. Later at 16.00, the police also searched in the passenger cabin and seized five more items on top of the documents already seized including a NDM donation box made of paper with 2,571 baht inside and a booklet “In the name of the NCPO’s (in)justice” by the Thai Lawyers for Human Rights (TLHR).

The items seized by the officials include;

2. Vinyl banner reading “Any Thai Prime Minister is subject to mocking”, one copy

5. A wooden stick with flag reading “7 August: Let’s vote against the Draft Constitution”

10. Document, the public statement of the Nitirat Group on the Referendum, nine copies

11. Document “How to apply to vote outside your constituency”, 70 copies

14. Document “Seven reasons to vote against the Draft Constitution”, 127 copies

15. Document “How to apply to vote outside your constituency”, 123 copies

18. Paper box bearing a sticker reading “No Vote” and “Donations made to the New Democracy Movement (NDM)” on the sides of the box

Search and arrest of another young activist

On the same day, 10 July, at 20.20, a combined force of police and military invoked the Head of the NCPO Order No. 13/2016 conducted a search in the house of Mr. Panuwat Songsawatchai, student of Faculty of Political Science, Maejo University Phrae Campus – Maejo University, in Nakorn Pathom province. According to police, it was found in the CCTV footage that Mr. Panuwat Songsawatchai had allegedly acted as an accomplice in the aforementioned crime with the four other suspects. The officials questioned him whether the constitution campaign materials had been moved and stored in his house or not. Then, the officials conducted the search and none of the campaign materials were found.

Panuwat was charged, with the same offence as the four under Section 61 paragraph two of the Constitutional Referendum Act. He was taken to the Ban Pong Police Station in Ratchaburi province and kept in custody with the other four suspects.

Panuwat was earlier at the Ban Pong Police Station in Ratchaburi to reprort himself to police for charges of violating the NCPO’s ban on political gathering of fiver persons from his involvement in setting up a referendum monitoring center with other people.

All five suspects were detained over night in a holding cell at the Ban Pong Police Station where police denied them bail requests. The interrogation took place that night and they were to be brought to the Provincial Court of Ratchaburi, a civilian court, for a pre-trial remand hearing on the next day (11 July 2016) at 9.00.

Remand hearing and Bail at the Ratchaburi Provincial Court

The Provincial Court of Ratchaburi Province, on 11 July 2016, granted permission to the police to detain the five suspects: Mr. Taweeesak Kerdpoka, a Prachatai journalist, and four pro-democracy activists, Mr. Pakorn Areekul, Mr. Anucha Rungmorakot, Mr. Anan Loked, and Mr. Phanuwat Songsawadchai. However, at around 16:30, the Court granted bail for all of them upon placing bail deposit of 140,000 Baht (approx. 4000 USD) for each of them. They were released but charges against them are ongoing.

Prosecution against the Vote-No campaign materials

Previously, on 23 June 2016, other NDM activists and union activists, 13 of them, were arrested while distributing campaign material to public to urge them to vote to reject the draft Constitution during the upcoming Referendum in Samut Prakan province. They were subjected to jurisdiction of military court after being pressed with charges relating to the violation of ban on political gathering of five persons under the Head of the NCPO Order No. 3/2015 and the Constitutional Referendum Act’s Section 61.1 Seven of thirteen who rejected the military court jurisdiction and did not request for temporary release were subject to 12 days of pre-trial detention at the Bangkok Remand Prison before the Court dismissed police request to further detain them on 5 July 2016 after which they were released on 6 July.

In addition, seven other student activists from the Kasetsat Liberals, were apprehended while organizing a ceremony to mark the anniversary of Thailand’s democracy “24 June: Dusting off Democracy” at the Lak Si Monument on 24 June and their ‘Vote No’ campaign material of their car were also seized. The seven activists were pressed with charges relating to the political gathering of five persons and upward, the violation of the Head of the NCPO Order No. 3/2015, though they were not charged for violating the Constitutional Referendum Act’s Section 61.

The arrest of the NDM activists and a reporter on the offence against the Constitutional Referendum Act as a result of the documents recouped from their vehicle, even though they were not yet distributed, emerged in the wake of puzzlement by the suspects in the case. This happened after the CDC’s Chairperson, Mr. Meechai Ruchuphan, told the press that there has been a distribution of fake copies of the draft Constitution in the province of Chiang Mai with distorted content. He further alleged that the publication had been made by an organized group with backing from influential persons.2 Mr. Pakorn Areekul rebuked the comment saying that the ‘fake Constitution’ mentioned by Mr. Meechai is in fact the document explaining the reasons why the draft Constitution should be rejected and the information that contradict to the benefits touted by the CDC about the Draft Constitution. Pakorn explained that the NDM’s activities have been funded by public donation.3

1 Activists detained for campaigning to vote ‘No’ in constitution referendum, https://tlhr2014.com/?p=720 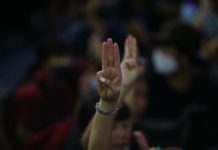