7 August 2016 is scheduled for the Constitutional referendum by the Thai military government and the National Council for Peace and Order (NCPO), the junta-ruling body. In the run-up to the referendum, the New Democracy Movement (NDM), a group of student activists and other activists which was formed at the first anniversary of the coup in late June 2015, has started their campaign to encourage people to cast their votes to reject the draft Constitution as they are of the opinions that the draft is undemocratic.

On 23 June 2016, 13 of the NDM activists and some of labour rights groups were arrested by military while distributing and handing out leaflets and documents campaigning for ‘vote no’ in the referendum. All of them are charged with violating the junta’s ban on political gathering of five persons and an offence agains the Constitution Referendum Act 2016. They are subject to military court jurisdiction and, if found guilty, could face up to 10 years of imprisonment, fine of 200,000 Baht, and also have their right to vote revoked by court according to the Referendum Act.

The combined forces of police and military arrested the NDM student activists and members of the Triumph Labour Union, 13 of them, while they were distributing leaflets, fliers and documents to passerby at the market of Kan Keha Bang Pli Community in Samut Prakan province around 17.30 on 23 June 2016. The documents give brief information about the draft Constitution and explain the reasons why people should reject it. All of them were apprehended and taken to the Bang Sao Thaong Police Station. Their campaign materials were confiscated including (1) large fliers bearing the text “Vote No”, (2) booklets, titled the “Arguments and explanations about the essence of the Draft Constitution, the ten things you should know”, (3) large fliers titled “Kao Kham” (Transcending) by the New Democracy Movement (NDM), and (4) brochures explaining how to register to vote outside one’s constituency and a form to register or to unregister to vote outside one’s constituency plus one megaphone. They were detained in police custody overnight and six of them who requested bail during police stage were denied bail. On 24 June 2016, all the 13 were brought to the pre-trial remand hearing at the Bangkok Military Court. Pol Cap Withoon Pengbuppha, the police investigator of Bang Sao Thaong Police Station, asked the Court to have them remanded for 12 days claiming it necessary for questioning ten more witnesses and fearing the reoccurrence of the crime which may post an obstacle or jeopardize the investigation. Meanwhile, the alleged offenders’ attorneys had filed a motion to object to the remand request, citing that the Order of the Head of the NCPO no. 3/2015 is not an applicable law and its Article 12 (ban on any political gathering of five persons or more) is a restriction of the rights to freedom of expression and peaceful assembly which are recognized in the Constitution and the International Covenant on Civil and Political Rights (ICCPR) to which Thailand is a state party. Also, the right to freedom of expression should not be criminalized. In addition, the NCPO Announcement no. 37/2014 which specifies the jurisdiction of the Military Court simply states that the Military Court can only adjudicate cases relating the offences against the Announcements or Orders of the NCPO, not the Order of the Head of the NCPO. Therefore, the Bangkok Military Court has no power to review the case and to conduct the remand hearing in this case. Nevertheless, the Military Court persisted to issue a writ to have the 13 alleged offenders remanded claiming that they were just arrested and more time was needed for police investigation including several more witnesses to be interviewed and deeming that the objection of the alleged offenders was a legal defence. Thus, the Court dismissed the objection to the remand motion, and approved a 12-day of pre-trial remand as submitted by police.

Six alleged offenders have been released by the order of the Military Court by placing bail bond at 50,000 Baht for each of them. They, however, have to comply with the conditions set forth by the Military Court including to “not get involved with any act aimed to instigate, disrupt public order, persuade, compel people to rise up by any means possible in order to make possible any public assembly which may bring about public disorder or cause any harm or infringement on peace, order or the moral high ground of the people or any act which may induce people to commit a legal offence”.

At present, the other seven students and activists are held in custody at the Bangkok Remand Prison. They all refused to apply for bail citing that they had done nothing wrong and should not be subject to the jurisdiction of the Military Court. They did not want to accept the conditions attached to the release as dictated by the Military Court. On 5 July 2016, when the first period of remand ends, the attorney shall file another motion to object further remand.

One of 13 activists arrested this time, Mr. Rangsiman Rome, used to be remanded in custody last year and has a trial pending against for violating the Order no. 3/2558 (3/2016) of the Head of the NCPO [ban on political gathering of five persons] and the Penal Code’s Article 116 [sedition-like offence]. On 25 June 2015, the 14 NDM members were arrested and charged as a result of their campaign to demand democracy. By rejecting the second motion for pre-trial remand filed by the police, the Bangkok Military Court ordered their release on 7 July 2015, after their having been remanded in prison for 12 days.

The case pivotally important since it concerns the rights to freedom of expression and of peaceful assembly, fundamental rights in a democratic system. The activists simply and peacefully distributed documents to encourage people to cast their votes in the upcoming referendum and to reject the draft Constitution which is so fundamentally related to democratization and the future of Thailand. Any referendum conducted in the climate of fear cannot warrant any notion of being free and fair.

The case is the second of its kind that civilians have been prosecuted invoking Article 61 of the Referendum Act 2016 and the first of its kind that a referendum-related case is being tried in the Military Court since the alleged offenders in this case have been charged invoking the Order of the Head of the NCPO no. 3/2016 as well.

Article 12. Political gatherings of five or more persons shall be punished with imprisonment not exceeding six months or a fine not exceeding ten thousand Baht, or both, unless permission has been granted by the Head of the NCPO. or an authorized representative.

Anyone who commits an offence under paragraph one who voluntarily agrees to receive corrective training from Peacekeeping Officers for a period not exceeding seven days may be released with or without the conditions stipulated in Article 11 paragraph 2 at the discretion of Peacekeeping Officers. The case will then be considered closed according to Section 37 of the Code of Criminal Procedure as amended by the Criminal Code Amendment Act (No. 16), 1986.

Any person who contravenes or fails to comply with conditions of release shall be punished with imprisonment not exceeding six months, or a fine not exceeding ten thousand Baht, or both.

Anyone who publishes text, images or sound, through either newspaper, radio, television, electronic media or other channels, that is either untruthful, harsh, offensive, rude, inciting or threatening, with the intention that voters will either not exercise their right to vote, or vote in a certain way, or not vote, shall be considered as a person causing confusion to affect orderliness of voting.

If the offences are committed by a group of five persons or more, each person shall be punished with imprisonment of one to ten years, a fine from 20,000 to 200,000 baht and a 10-year revocation of voting right by court.

Section 17 states that a holder of a national identification card who fails to produce the card or equivalent document upon an official request shall be punished with fine not exceeding to 200 Baht.

Any person who is accused of committing criminal offences has a duty to give fingerprints or footprints in criminal proceedings as ordered by prosecutors, judges or police investigators. Whoever violates such order shall be punished with imprisonment of not exceeding 6 months and/or fine of not exceeding 1,000 Baht for disobeying the order of the officials by refusing to give their fingerprints. 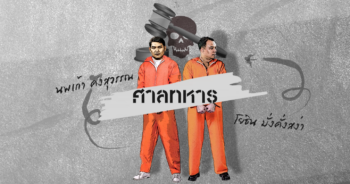