The second cycle of the Universal Periodical Review (UPR) of Thailand was held on 11 May 2016 in Geneva, Switzerland. Many UN member states raised concerns and questions about the use of military courts to try civilians. To respond to the queries from other member states, a team of representatives from the Government of Thailand attended the session, including Lt. Col. Seni Bhromvivat, the Head of the Military Legislation Section of the Judge Advocate General’s Department from the Ministry of Defense.

Lt. Col. Seni Bhromvivat, as a representative of the Government of Thailand, explained to the Human Rights Council that the application of military jurisdiction to civilian cases is limited to specific and severe offences. The defendants in the military courts have the same rights as those in civilian courts as the military courts operate under the Criminal Procedure Code which guarantees the right to a fair trial and other rights of defendants in line with international obligations.  The military judges are required to have legal knowledge and proficiency in criminal law, similar to judges in the civilian court system.

Lt. Col. Seni further explained that military judiciary guarantees the right to a fair and public hearing by an independent judiciary. The defendant has the right to legal assistance and the right to bail, and receives consideration for temporary release, the same as within the civilian judiciary. The military trials also are open for public observation,  including civil society and human rights organizations in addition to defendants’ families.

However, after extended observation of trials of civilians in military courts, Thai Lawyers for Human Rights (TLHR) has found that the representative’s explanation to the international community is inconsistent with the actual situation. Military trials are explicitly and considerably differ from civilian trials in many ways, all of which affect access to rights during the judicial proceedings and result in violations of the rights of civilian alleged offenders and defendants. 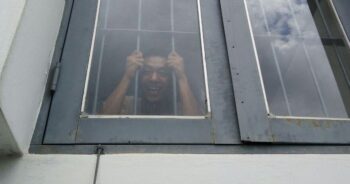