Not long after the second round of the Universal Periodic Review (UPR) of Thailand on 11 May 2016 ended, several questions from member states concerning human rights situations in Thailand, including the military jurisdiction, the enforced disappearance, and the restriction of freedom of expression have resulted in the National Council for Peace and Order (NCPO)’s attempt to appear as more alleviate on people’s exercise of rights and freedoms. The Head of NCPO Order no. 25/2016 regarding the revocation of the overseas travel ban on individuals , announced in the Royal Gazette on 31 May 2016 and became effective on 1 June 2016, is the latest move.

However, the Thai Lawyers for Human Rights (TLHR) has found that, although the Head of NCPO Order no. 25/2016 regarding the revocation of overseas travel ban on individuals may appear to present an ease on government’s restriction of rights and freedoms, it benefits only a limited number of persons, and may even impose additional restriction as following;

The Head of NCPO Order no. 25/2016 revokes the Announcement of NCPO no. 21/2014, the announcement that prohibited individuals who reported themselves to military as summoned by theNCPO Orders no. 1/2014, 2/2014 and 3/2014 from travelling out of the country, 155 names on the lists. The three Orders were issued before the Announcement of NCPO no. 39/2014 about conditions of release of individuals summoned by the NCPO, announced on 25 May 2014. Therefore, the persons listed in the three Orders were not bound by the conditions in the annex to the Announcement no. 21/2014 which bans overseas travel.

The TLHR has a remark that the persons who were summoned by the NCPO Orders after 25 May 2014, at least 300 names on the lists, do not benefit from the Head of NCPO Order no. 25/2016, because those who reported themselves to the NCPO had to sign a document which contain the conditions of release in the annex of the Announcement no. 39/2014. In addition, some people included in the list of 155 names, mostly politicians, will not benefit from the revocation of the Announcement no. 21/2014 as they have pending lawsuits or have been summoned by military more than once, such as Mr. Pichai Naripthapan, Mr. Chaturon Chaisang, or Mr. Watana Muangsook

In fact, a person who has never defied the Announcements and Orders but has signed the conditions upon release, which prohibits travelling abroad without the Head of NCPO’s permission, will not be affected by the Order no. 25/2016. They are still bound by the conditions and are obliged to seek permission to leave the country.

Apart from not benefitting people under the restriction according to the Announcements of NCPO no. 39/2014, 40/2014, 41/2014 and the Head of NCPO Order no. 3/2015, by stating that “any person who defies or fails to comply with the aforementioned Announcements and Order must be granted permission from the Head of the National Council for Peace and Order before travelling out of the Kingdom” could be interpreted that any person who did not sign the release conditions but has defied the Announcements or the Orders may have to seek permission as well. For instance, people who participated in a political gathering of more than 5 people, but did not sign the release conditions that prohibit leaving the Kingdom under the Head of NCPO Order no. 3/2015, may be considered to have to seek prior permission under this new Order, even though they were not bound to the said conditions.

The Thai Lawyers for Human Rights considers that the Head of NCPO Order no. 25/2016 is an attempt to put on an act than the NCPO has loosened its strict stance on rights and freedoms, but does not evoke any difference in practice due to the limited number of benefited people and other conditions, Announcements, and Orders that remain effective in overseas travel bans. In addition, citizens could be at risk of the sweeping law enforcement by the NCPO because of word choice in the Order that can be broadly interpreted. 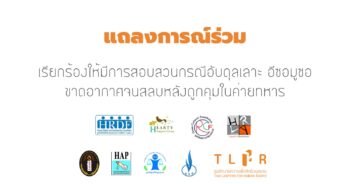