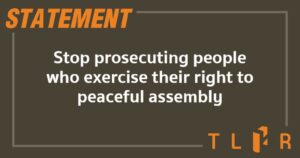 On 1 February 2018, a group of individuals was gathered holding banners to show their support to Gen. Prawit Wongsuwan at the entrance of the Ministry of Defence. Later, a report has been made against them to the officers at the Phra Racha Wang Police Station. On 5 February 2018, one of the demonstrators, Mr. Adul Thammachit, has gone to meet an inquiry officer at the Phra Racha Wang Police Station to answer to the charges relating to having participated in a gathering of five persons or more without permission, an offence against the Head of NCPO Order no. 3/2558; and an offence against the 2015 Public Assembly Act’s Section 7 coupled with 27 for participating in a public assembly within 150 meter-radius from a royal residence.

Based on the indiscriminate enforcement of the law, Thai Lawyers for Human Rights (TLHR) has found Thailand, as a state party to the International Covenant on Civil Rights and Political Rights (ICCPR), is obliged to exercise its legislative, administrative and judiciary powers to uphold respect, protect and guarantee the right to freedom of peaceful assembly, as provided for in Article 21 of the treaty and as provided for in Section 44 of the 2017 Constitution of the Kingdom of Thailand as well.

TLHR has the following opinions to make concerning the prosecution of the persons who have exercised their right to freedom of assembly;

TLHR urges both civilian and military authorities, the police and concerned persons in Thailand to stop prosecuting individuals who exercise their right to freedom of peaceful assembly in all cases as provided for by the Constitution and international treaty. In addition, Thailand should respect the exercise of such civil rights and political rights and accept the crucial importance of the rights which can be exercised in accordance to a democratic rule.