There were two developments on 28 April 2016. First, relatives of the persons held in custody have gone to the Bangkok Criminal Court to file a complaint asking the Court to review the lawfulness of the detention and to have them released from custody. The Court will deliver the verdict on 29 April at 10.00am. Second, the eight suspects held in custody since morning of 27 April have been transferred from the 11th Military Circle to the Crime Suppression Division to be informed of their charges in the afternoon. All of them have been accused of violating the Penal Code’s Article 116 for committing seditious act and inciting public unrest and the Computer Crime Act (CCA). Two of them, Harit and Wararat found themselves accused of committing a lèse-majesté offence as well, according to the announcement of the Bangkok Metropolitan Police 6 Commander.

28 April 2016, 11.00am, relatives of the individuals taken from homes and held in custody of the military since morning of 27 April including Mr. Noppakao Kongsuwan, Mr. Suphachai Saibutr, Ms. Wararat Mengpramoon (name should withheld) and Mr. Harit Mahaton went to the Bangkok Criminal Court with lawyers from the Thai Lawyers for Human Rights (TLHR) to file a complaint with the Court to have them released from unlawful custody invoking Article 90 of the Criminal Procedure Code.

In sum, the relatives of the four suspects pleaded to the Court concerning about the behavior of the officials when conducting the raids to hold the four suspects in custody. The officials neither stated the reasons for the arrest, nor informing them of their charges. They did not produce any court warrants or search warrants. As relatives of Mr. Noppakao and Mr. Suphachai have gone to visit them at the 11th Military Circle, they were also denied the entry.

Around 13.30, the relatives and the lawyers were still waiting to hear whether the Court would accept to review the case or not. If the Court finds the case well-grounded, it would fix a hearing and order the authorities to bring forth the persons held in custody to the Court. Around 15.00, the judges ascended to the bench in the courtroom to receive evidence from the witnesses of the complainants. TLHR lawyer pleaded to the Court that during the time, the relatives of the persons held in custody were on their way to the Crime Suppression Division as they had heard news that the persons being held custody were to be brought to there, and the Court was asked to hear evidence from the lawyer instead. The Court fixed a hearing to deliver the verdict on the prima facie of the case on 29 April at 10.00am.
The eight persons held in custody were brought to hear their charges at the Crime Suppression Division

It was reported in the morning around 10.00am that the inquiry officials of the Crime Suppression Division have submitted an investigation report to the Bangkok Military Court to ask the Court to issue arrest warrants against eight individuals including (1) Ms. Wararat Mengpramoon (name should withheld), (2) .Mr. Chaithat Ratanachan, (3) Mr. Noppakao Kongsuwan, (4) Mr. Worawit Saksamutnan aka “Oun”, (5) Mr. Yothin Mangkangsanga aka “Yo”, (6)  Mr. Thanawan Buranasiri, 22, (7) Mr. Suphachai Saibutr aka “Tum”, 30, (8) Mr. Harit Mahaton, 27, and (9) Mr. Kansit Tangboonthina aka “Tee”, 34, for the violation of the Penal Code’s Article 116 by committing seditious act and inciting public unrest and the Computer Crime Act (CCA).[1] It was also reported that the eight of them were being transferred from the 11th Military Circle to the Crime Suppression Division to hear their charges at 14.00. There were a lot of media waiting to cover the case at the Crime Suppression Division. Around 15.50, a minivan bearing its affiliation of “the Infantry Battalion, the 11th Military Circle” with two Humvees drove into the Crime Suppression Division. The eight of them were taken from the vehicle and brought to the Prassajak Sattru Room on the third floor for inquiry. Mr. Chaithat Ratanachan was not there and was initially reported to have been abroad.

TLHR’s lawyers  and the relatives of Ms. Wararat Mengpramoon (name should withheld), Mr. Noppakao Kongsuwan, Mr. Suphachai Saibutr and Mr. Harit Mahaton have asked for permission to participate in the inquiry session since the relatives of the four suspects had already appointed TLHR’s lawyers as their legal representatives to file the habeas corpus case. But all of them were not allowed to be present during the inquiry. Pol Gen Sriwara Ransibrah-manakul, Deputy National Police, have ordered the removal of the lawyers and the relatives from the inquiry room, even though the lawyers insisted that the relatives had complained to them and asked for their legal representation for the four suspects. A scuffle ensued as the officials tried to push the lawyers and relatives out of the room causing a commotion.

After the incidence, Ms. Yaowalak Anuphan, Head of TLHR, told the press that the raids and arrests of the individuals on 27 April had not been conducted in compliance with the law, even though the authorities had claimed to invoke power from the Head of NCPO Order no.13/2559 and later the NCPO’s spokesperson, Col. Winthai Suvaree, came out to claim the individuals were to be participating in a week long attitude adjustment program per their offence of the Computer Crime Act (CCA). But the Head of NCPO Order no. 13/2559 does not cover an offence against the Computer Crime Act (CCA). The offence against the CCA is not included in one of the 27 culpable acts prescribed by the Order. The lawyers had already file a habeas corpus case. Then, the military had handed over the investigation report to the police and the police had just sought arrest warrants from the Military Court. The procedure was ambiguous. It looked like the police or the military were abusing the law to violate people’s rights. The Head of NCPO Order no. 13/2559 had simply been invoked to justify the abduction or the arbitrary detention of persons and this was unacceptable. In addition, the Order had been issued unlawfully and it has given draconian power to the competent officers to carry out the arrest arbitrarily.

Ms. Poonsuk Poonsukcharoen, TLHR’s Information Officer and lawyer, told the press as well that TLHR has been affirming all along that the incumbent justice process is nothing short of a ‘camouflaged justice process’ whereby civilians are being tried in a military court. Nothing can guarantee that justice will be served for them since the whole justice process lacks independence and impartiality.

Ms. Kumklao Songsomboon, TLHR’s lawyer, also told the press that, she and other lawyers of TLHR had been appointed by the relatives of the four suspects as their legal representatives to file a complaint invoking the Criminal Procedure Code’s Article 90, the habeas corpus case, since they were in doubt that the detention had been made unlawfully. They had filed the complaint with the Court and some lawyers were waiting there at the Bangkok Criminal Court awaiting the examination of the Court. When they had learned that the four suspects were bring brought to the Crime Suppression Division, they decided to come here to meet their four clients. And their relatives were there to inform the authorities that they had appointed the lawyers as their legal representatives and that the lawyers and the relatives wanted to be present during the inquiry session.

The police led by Pol Maj Gen Chayaphon Chatchaidet, Bangkok Metropolitan Police 6 Commander, then held a press conference to describe the culpable acts of the eight suspects. The Police Commander recounted that the eight individuals had conspired to distribute images and content to discredit the National Council for Peace and Order (NCPO) and the government as well as the junta chief via facebook. They received their monthly salaries. In addition, it was found that two of the suspects, Harit and Wararat, based on the examination of their personal web pages, were found to have committed a lèse-majesté offence. Maj Gen Wijarn Jodtaeng, Director of the Legal and Human Rights Affairs, Internal Security Operations Command (ISOC) and interim legal chief of the National Council for Peace and Order (NCPO), would proceed to press them the additional charge on the violation of the Penal Code’s Article 112 as well.[2]

After the press conference and after most of the reporters were gone, around 20.00, Ms. Pawinee Chumsri, THLR’s lawyer, attempted to have access to the suspects to ask for information needed to prepare the pleading to oppose the remand during the hearing at the Military Court tomorrow. But the police officials guarding the room denied her the entry claiming it was the order from their superior officers. The lawyer was told to wait until tommorow’s morning in order to meet her clients and to retrieve the information needed to prepare the pleading.

“The courtroom has been made into a prison”: Defendants in the 19 September case declare withdrawal of legal representation Three more prominent leaders, all accused of violating Section112, denied bail in the wake of the indictment of 18 Ratsadon activists in the #19SeptRestoringPeoplePower...

The plaint of pounding “Mike-Penguin’s” prisoner vehicle, 7.5 years with their bail request denied of suspects, while one insisting not participating in the assembly. 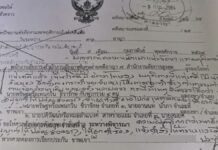 The Court of Appeal denied a request to release 4 protest leaders, citing their speeches have tarnished the reputation of the monarchy, despite the...