On 10 December 1932, King Prajadhipok (Rama VII) gave effect to the first constitution of the people of Siam after the Siamese Revolution of the same year, marking Thailand’s transition from absolute to constitutional monarchy. To commemorate the promulgation, 10 December is annually celebrated as Constitution Day. However, Thailand has seen more than one constitution following each successful coup, and all in all there have been 13 military takeovers in the 84-year history of Thai democracy.

After the 13th coup on 22 May 2014, the National Council for Peace and Order (NCPO), the ruling junta led by Prime Minster Gen Prayuth Chan-Ocha, limited people’s exercise of freedom of expression with the imposition of martial law throughout Thailand. The NCPO Announcement no. 7/2014 was issued and invoked to ban any political gatherings of five persons or more up until the lifting of martial law on 1 April 2015. It was replaced by the Head of the NCPO Order no. 3/2015—issued under Article 44 of the Interim Constitution—which grants the Head of the NCPO sweeping unchecked power to issue any legislative, judicial and executive orders. The order is currently still in effect.

Even in the run-up to the Constitutional Referendum dated 7 August 2016, the military government did not refrain from prosecuting civilians who simply expressed their opinions on the draft. The National Legislative Assembly (NLA) passed the Constitutional Referendum Act in April 2016, which contains Article 61, criminalizing discussions on the draft constitution. With heavy penalties of up to 10 years’ imprisonment and revocation of the right to vote it is one of the NCPO’s mechanisms that further diminishes already limited political space. Even though the Constitution is the supreme law of the state, consisting of fundamental principles to establish state power and guarantee the rights and freedoms of all citizens in economic, socio-cultural and political aspects, free discussion on its pros and cons was suppressed. Restricting access to information, the junta policed public perceptions of the draft, ignoring differences of opinion. As a result, the non-participatory approach to the draft and the referendum met with skepticism and criticism. Many people voiced concerns that the draft’s contents undermined the rights and liberties of the Thai people, in a manner inconsistent with a constitution under a democratic regime.

In contrast with the principle of informed consent, there was little time and space for eligible voters to be well-informed or allowed to discuss freely the content of the draft, so that they could cast their votes reasonably in a free and fair referendum. Based on the monitoring of Thai Lawyers for Human Rights (TLHR), the government made use of the state’s “legal mechanisms” to extensively control alternative opinions on the draft, including via the Head of the NCPO Order no. 3/2015, banning any political gatherings of five or more persons, Articles 60 and 61 of the Constitutional Referendum Act, and pre-existing legislation such as Articles 116, 210 and 211 of the Thai Criminal Code. Organizers of public forums, seminars, and campaigns that criticized the draft’s content and the referendum process were met with interference and termination of their events by law enforcement and administrative mechanisms, citing such “laws.” Many were charged. Central to the junta’s enforcement of its self-written legislation and so-called security laws is that many civilian cases would be tried in military courts. Such practice not only affected the organizers, participants and observers in these events, but also set a precedent for how further discussions would be concluded, sending a clear message to the general public.

Thai Lawyers for Human Rights (TLHR) found that at least 207 persons had been charged for expressing their opinions and criticisms and for their campaigns related to the draft prior to and after the Constitutional Referendum. Some of the alleged offenders, or “referendum suspects”, were charged under the Head of the NCPO Order no. 3/2015; however, they agreed to attend corrective training organized by the “peace and order maintenance officers,” in accordance with Article 12 of the Act, in exchange for the dismissal of their cases. As at 14 December 2016, referendum-related cases can be sorted by alleged acts committed as follows:

Organizing Forums and Events Related to the Draft Constitution (11 Persons)

Currently, at least 143 persons are facing legal actions for offences related to the referendum, 5 of which face two proceedings. Many cases were dismissed, for a total number 57 persons, with no available information for at least 12 referendum suspects. At least 207 persons have been charged as a result of simply exercising their freedom of expression and right to peaceful assembly on the matters of the referendum and the draft constitution.

Referendums are legal mechanisms to confirm people’s participation in direct democracy, often used to vote on key policies proposed by the state’s legislature. In parallel with democratic principles, the right to be informed together with the freedom of expression plays a significant part in people’s access to free and fair information, prior to the referendum, so that they can cast a reasonable vote.

The International Covenant on Civil and Political Rights (ICCPR), of which Thailand is a ratifying Member State, guarantees the freedom of expression in Article 19, that, “Everyone shall have the right to hold opinions without interference.” According to General Comment no. 34, freedom of opinion is an element that cannot be made subject to the state’s lawful derogation under Article 4.

1.2 Constitutions of the Kingdom of Thailand

Article 4 of the 2014 Interim Constitution guarantees that “Subject to the provisions of this Constitution, human dignity, rights, liberties and equality previously enjoyed by the Thai people with the protection under Thailand’s administrative conventions of the democratic regime of government with the King as Head of State and Thailand’s existing international obligations shall be protected under this Constitution.” Throughout the history of Thailand, each constitution has promised people the right to freedom of expression, including the 2007 Constitution, whose Article 45 provides that “A person shall enjoy the liberty to express his or her opinion, make speeches, write, print, publicize, and make expression by other means,” together with Article 63 that “A person shall enjoy the liberty to assemble peacefully and without arms.” Despite the Interim Constitution’s missing commitment to the freedom of expression and peaceful assembly, state agencies are legally bound by human rights obligations under Article 4 to protect and promote the human rights of the Thai people.

Article 7 of the Constitutional Referendum Act 2016 guarantees people the right and freedom of speech, to express and disseminate opinions on the draft and the referendum in good faith and in compliance with the law.

The criminal justice system carries two main purposes. First is to maintain the public order by proscribing and enforcing certain acts with prescribed punishment. For example, Article 288 of the Criminal Code states that murder is a criminal offence and is punishable by heavy penalties, in order to prevent the practice of murder in society. Second is to protect fundamental rights and liberties of the people from the state’s exercise of power. Criminal laws must state explicitly and definitely what conduct is punishable by law. With strict interpretation, state personnel, including law enforcement, prosecutors, court officials and other practitioners, cannot implicate and punish citizens without written legislation. “Nullum crimen nulla poena sine” (Latin for ‘no penalty without a law’) is a legal principle stating that one cannot be punished for acts not prohibited by the law. Thailand’s criminal justice system endorsed this principle in Article 2 of the Criminal Code that “A person shall be criminally punished only when the act done by such person is provided to be an offence and the punishment is defined by the law in force at the time of the doing of such act, and the punishment to be inflicted upon the offender shall be that provided by the law.”

3. Prosecutions that Do Not Serve Public Interest

In criminal procedure, the power to exercise “prosecutorial discretion” is bestowed on Thai prosecutors, allowing them discretionary power to issue a non-prosecution order. Not only can the exercising of prosecutorial discretion help in reducing the case backlog in courts—through case dismissal and diversion (when a case is handled outside of the court)—but it can also resolve political conflicts both at national and international levels.

Further, Article 21 of the Public Prosecution Organ and Public Prosecutors Act 2010 guarantees public prosecutors discretionary power to issue non-prosecution orders for cases that, in their opinion, do not serve the public interest. The Article states that, “A public prosecutor shall be independent in faithfully and fairly ruling on the institution of a lawsuit and discharging duties under the Constitution and laws.

Should a public prosecutor find that a criminal prosecution would be of no use to the general public, would affect the national safety or security, or would impair a significant interest of the State, he or she should refer the opinion to the Attorney General who may then render an order of non-prosecution. This order shall be subject to the rules laid down by the Office of the Attorney General, with the approval of the Public Prosecution Service Commission (PPSC).

On 10 August 2016, Professor Kanit Na Nakorn, former Attorney-General and former Chairman of the Truth and Reconciliation Commission (TRC), gave an interview to Thai PBS about proposals to acquit all cases charged under the Referendum Act. According to Prof Kanit, the government has primary responsibility to maintain public order during this transition period. Acquitting referendum suspects, in turn, may prove to be effective in calming anger and frustration among the general public. Since the draft has already won approval, all parties should generously embrace forgiveness and pardon. Punishments will not encourage a positive environment. While public prosecutors play a key part in this scene, they need to have the courage to deliver the right orders.

“They can do it. Public prosecutors can issue a non-prosecution order in any case if they see that the particular case does not serve the public interest. It’s in the law itself. What wouldn’t you do for the public peace if you have the power? The referendum is already concluded. People charged for tearing a ballot are prisoners of conscience, not criminals by nature. The prosecutors can acquit the case or withdraw the indictment: they have the authority to do so. The job is not to do what’s good for yourselves, but for the society.”

Kanit indicated that, when the cases advance public prosecutors will be more or less involved. The Attorney General can set out regulations for referendum-related cases for prosecutors to follow. For certain cases under the military courts’ jurisdiction, the military prosecutors can adopt these regulations as well. However, this practice is subject to the prosecutors’ discretion.

Prof Kanit sees that although the referendum suspects are listed as threats to national security, the NCPO should draft detailed guidelines to distinguish referendum-related cases from politically motivated prosecutions.

In light of the principles of law mentioned above, Thai Lawyers for Human Rights (TLHR) offers its legal opinion as follows:

Moreover, these instruments contain vague wording that could encourage a too broad and ambiguous interpretation. Law enforcement and judicial practitioners as well exercise extensive statutory interpretation, including in the Ratchaburi case, where the referendum suspects were charged for allegedly possessing anti-draft documents, despite the lack of legislation to penalize such acts.

Thai Lawyers for Human Rights, based on the aforementioned principles, proposes that the judiciary, lawyers, court officials and other practitioners in the Thai “justice system” cease legal actions in every stage against all referendum suspects, including:

With respect for rights and liberties of the people, 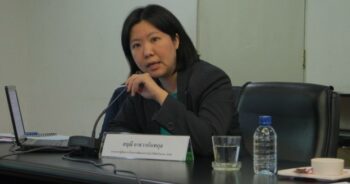 Case Background: On Monday 9th September 2019, Ms Sarinee Achavanuntakul and Mr Yuttana Nuanjarut, a news editor at the Krungthep Turakit newspaper, will appear before the Supreme Court to give testimony on charges of contempt of court. The court summons, dated 21st August 2019, included a copy of a memorandum sent by Mr Supradit Jeensawake, […]