On 15 February 2021 at 16.30 approximate, The Criminal Court read the order of the Court of Appeal to deny bail requests of 4 protest leaders of the “Ratsadon Group”, which is in accordance to the Court of First Instance. After 11 February 2021, the lawyer filed an appeal against the Court’s order denying bail requests temporary release of “Penguin” Parit Chiwarak, Arnon Nampa, “Molam Bank” Patiwat Saraiyam and Somyot Phrueksakasemsuk during proceedings of the trial, in the case of #19SeptemberProtestReturingPowerToPeople. In addition, the Court’s order denied a temporary release of Parit Chiwarak, in the case of #14NovemberProtest or Mob Fest. Both of the cases are allegedly charged with Section 112 and Section 116 of the Criminal Code.

>>Filing an appeal against the Court’s order denying bail requests of protest leaders – Arnon, Penguin, Bank, and Somyot- citing that it violates the presumption of innocence

The Court of Appeal had issued the order since 12 February 2021, but it was recently sent to the Criminal Court to read out. The order was separated into three cases; Arnon, Parit, Somyot’s case, and Patiwat’s case, regarding #19SeptemberProtestReturingPowerToPeople, and Parit’s case regarding Mob Fest.

All orders were signed as approval by the judges of the Court of Appeal. However, the name of person who issued these orders does not appear. The following orders were read out by Mr. Chanathip Muenphawong, a judge of Criminal Court.

In the first order, it says “Considering the gravity and the circumstances of the case, the offenses have high penalty rates. The act according to the charges is collective offense of the group of people who are likely to cause damage or disorder which has wide impacts. The speech given by the defendants number 1, 2 and 4 bring disgrace to monarchy, which is widely revered and respected, hurt feelings of Thai people without fear of law, and incite people to violate the laws of the country.”

“In addition, the defendant numbers 1, 2 and 4 were arrested with the arrest warrant due to reasonable grounds that if they were allowed to temporarily release during the trial proceedings, the 1st , 2nd, and 4th defendant might cause further harm or damage and they posed a flight risk. Therefore, 1st, 2nd, and 4th defendants are not allowed to temporary release during the trial proceedings. The order of the Court of First Instance which does not allow temporary release is on the ground of law. The request is to be dismissed. 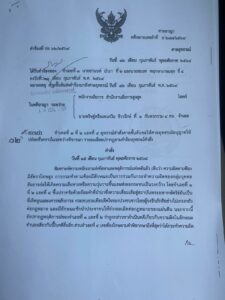 In the second order, which is the case of Patiwat, has the same content as the order of the three people; in addition, the Court of Appeal cited that “the third defendant was proven guilty with the similar offence” like Somyot. In the third order, which is the case of Parit regarding Mob Fest case, the Court cited the similar reasons as the two orders. However, the message “For this case, the defendant was arrested according to the arrest warrant” was crossed out, and the order also mentioned about the objection of bail request by the public prosecutor. All four defendants have been in detention from 9 February 2021 to 16 February 2021, which marks for 7 days or a week. For this case, they have been held in custody while awaiting trial. The defendants could only be released upon the Courts grant them bail or the Court deliver the verdict.