On October 15, 2020, General Prayut Chan-ocha’s have declared a severe state of emergency in Bangkok claiming that “a number of groups have solicited, incited, and acted to organize a public assembly in violation of the Public Assembly Act” in Bangkok. Through various means and channels, the rally has made to create chaos, disruption and public disorder including an act that infringes upon the royal motorcade. The declaration stated that it is reasonable to believe such violent acts may affect national security, safety in personal life and public property and do not constitute a peaceful assembly according to the Constitution of the Kingdom of Thailand. The rally also bears a direct impact on the achievement of the measures to contain the Covid-19 pandemic which shall directly affect the country’s fragile economic stability. Therefore, it is justifiable to enforce emergency measures to address the situation and to bring it to rest effectively and timely. This is to ensure the enforcement of the law and the maintenance of public order and interest.”

At the same time, a crackdown on the protests began on Ratchadamnoen road at 4.00 am. At least, 28 protest leaders and demonstrators were apprehended and taken to the Region 1 of Border Police Bureau in Pathumthani and to the Chanasongkram police station. The arrest of five people was made possible by the execution of existing warrants, whereas the other 23 people were arrested without warrants. On October 13, 21 demonstrators have already been apprehended and held in custody from the Ratchadamnoen Rd. and 20 of them have been denied bail by the Court and held in custody in the Bangkok Remand Prison and the Bangkok Woman Correctional Institution.

With grave concern regarding the situation, the Thai Lawyers for Human Rights (TLHR) has these opinions to offer;

Based on the aforementioned opinions, TLHR has the following demands for General Prayut Chan-ocha and responsible officials: 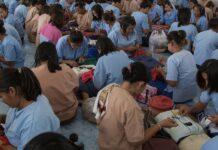 Eleven humanitarian organizations made an open letter to the Department of Corrections, urging for the release of vulnerable detainees at risk of being affected...