On 29 May 2018, Thai police issued summons to at least 47 more individuals to be charged in addition to 15 pro-democracy activists who were already charged by police on 22 and 23 May 2018.[1] This would be a total of at least 62 people who are facing legal actions in this case, for exercising their freedom of peaceful assembly to call for elections and democracy.

The recent name list includes Ms. Neeranuch Neamsub, one of TLHR staff who was on duty to observe and monitor the assembly at Thammasat University and in front of the UN ESCAP building in Bangkok on 21-22 May 2018. According to the summons, the 47 individuals will have to report themselves to police for notification of violating a ban on political gatherings of more five persons or more without a permission of the National Council for Peace and Order (NCPO) and other charges on 7 June 2018, at 9:30, at Nang Lerng Police Station in Bangkok. The details of accusations and all charges against them will be fully informed on that day.

TLHR’s staff is facing judicial harassment for observing the assembly

On 31 May 2018, the Thai Lawyers for Human Rights submitted a letter to an inquiry official of Chanasongkhram Police Station to clarify and explain about the roles of Ms. Neeranuch Neamsub, as TLHR staff who was assigned to observe, monitor and report on the demonstration on 21-22 May 2018. The TLHR urges the authorities to take into account, in compliance with laws and human rights principles, this information during the investigation and preparation of charges against the pro-democracy activists.

Ms. Neeranuch Neamsub has been employed as a full-time documentation officer for TLHR, based in the Northeast of Thailand, since 1 January 2015. She has been working on human rights violations documentation and observing activities held to exercise the right to freedom of expression or other activities which have been interfered or restricted by authorities, including public discussions, public forums, public assemblies, court trials in relation to cases of human rights and the exercise of freedom of expression. During the course of observations or field missions, TLHR staff is obliged to always wear a TLHR ID name tag, making it clearly visible to other persons, including general public and the officials who have been deployed in the area. This is to distinguish our staff members from other demonstrators.

During 21-22 May, 2018, Ms. Neeranuch Neamsub, together with six other TLHR staff members, had been designated by TLHR to observe the demonstrations of the pro-democracy activists. They were there to monitor how the situation unfolded and how the law enforcement officials responded to the situation. They were not there to participate in the demonstrations. During the mission, all of TLHR staff wore their name tags to identify themselves and wore a gray T-shirt with the acronym “TLHR” (“Thai Lawyers for Human Rights”) screened in front and “Thai Lawyers for Human Rights” in the back.

Additionally, in October 2017, Ms Neeranuch Neamsub and Ms Duangthip Karnrit, who are both documentation officers at TLHR, were indicted with Khon Kaen Military Court under charges of violating the Head of the NCPO Order no.3/2015, banning political gatherings of five individuals or more, for their alleged connections to a public forum “Talk for Freedom: The Constitution and Isaan People.”[2] They were present to monitor the discussion and had no involvement with the organizing team. Although they had clearly identified themselves as observers with the authorities, they were accused of the same charge as other activists.

Background of the case[3]

If convicted of the offences brought against them as listed in the appendix, the accused face up to seven years in jail.

Note: Defendants 1-7 were the leaders of the assembly and of the We Want to Vote Movement.

Read the full TLHR Letter to Police Regarding the Roles of its Staff as observer in a public assembly; 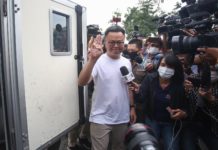