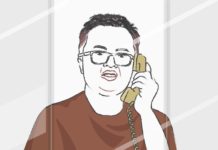 Complaint Disclosed: Students Submitted a Complaint to the Civil Court Calling for a Revocation of the Announcement of the Severe State of Emergency and...