In pursuance to a string of recent attacks of at least three pro-democracy activists including Aekachai Hongkangwan who was physically assaulted seven times and had his car set on fire twice since early 2018, and of late on 13 May 2019, Aekachai was violently attacked in front of the Bangkok Criminal Court after attending a hearing on the case against activists who have protested to demand the election. Anurak Jeantawanich was subjected to two physical attacks just in the first half of 2019, the latest of which took place on 25 May 23019 while he was going to demonstrate at the temporary building used as the Parliament. In the latest spree of violence against pro-democracy activists, Sirawith Seritiwat was attacked on 2 June at Ratchadepiesek 7 after launching a campaign to urge people to sign a petition to demand the Senators not to vote to elect the Prime Minister.

The Thai Lawyers for Human Rights (TLHR) and undersigned organizations are gravely concerned about the rise of intimidation against political activists throughout the past five years under the rule of the National Council for Peace and Order (NCPO). Thee repression includes banning of public activities, stalking and harassing the activists at their homes, unlawful detention, and strategic lawsuit against public participation (SLAPP). Since 2018 a string of attacks with similar patterns have taken place against political activists whereby men who have hidden their faces and were clad in black fatigue used wooden sticks and iron bars as their weapons to attack the pro-democracy activists. The ambushes have apparently been made possible by well-coordinated plans with several people assigned to do different parts of the plans. The attacks were timed right before or after the pro-democracy activities. Such attacks have been on the rise with increased violence and frequency and have caused more damage. Meanwhile, investigations of such cases have seen little progress, and no one have been brought to justice,

The activities organized or participated by the three activists, Aekachai, Anurak and Sirawith, were an exercise of the right to freedom of expression and peaceful and unarmed assembly. The exercise of such right is guaranteed by laws including Sections 34 and 44 of the 2017 Constitution and the upholding of rights and freedoms per Articles19 and 21 of the International Covenant on Civil and Political Rights (ICCPR).

The successive attacks of the three political activists do not just demonstrate failure of the state to uphold the right to freedom of expression, but also show the state’s failure to uphold and protect safety in life and body as well as property of the people. Such rights are absolute and warrant protection regardless of the ruling system of the state per Section 28 of the 2017 Constitution and Articles 6 and 9 of the ICCPR.

If such intimidation of activists which has escalated to sheer physical attack is tolerated and if no one can be brought to justice, it will certainly give rise to more violent attacks which may eventually be fatal. It would usher in a climate of fear which prevents people from exercising their right to freedom of expression and assembly and makes them lose their confidence in security of their lives, As such rights and freedoms are most fundamental in a democracy, the Thai Lawyers for Human Rights (TLHR) and undersigned organizations therefore have the following demands;

1. The authorities concerned with the criminal justice process and the National Human Rights Commission (NHRC), particularly the law enforcement, have to make an effort in earnest to investigate the intimidations and to bring to justice the perpetrators promptly, impartially and transparently.

2. The Thai state should uphold and protect the exercise of the right to freedom of expression and peaceful assembly prescribed for in the 2017 Constitution and the ICCPR.

3. The Thai state should encourage a climate that embraces different streams of thought among Thai people including those demanding a democratically elected government and accountability of the authorities or the attempt to monitor any corruption in governmental agencies, the National Council for Peace and Order (NCPO) and the Royal Thai Army. Such right to hold to account is guaranteed in the Constitution and the ICCPR.

Center for Protection and Rivival of Local Community Rights (CPCR) 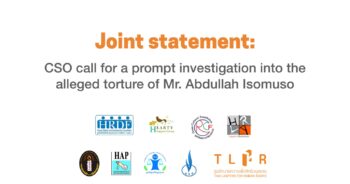 Joint statement: Civil society organizations call for a prompt investigation into the alleged torture of a suspected insurgent and urge the government to pass legislation criminalizing torture and ill-treatment 23 July 2019 On 21 July 2019, at around 3:00 am, Mr. Abdullah Isomuso, a suspected insurgent, was found unconscious inside the Inquiry Unit of Ingkhayutthaborihan […]