The People GO Network is to launch the “We Walk…Solidarity Walk” from  20 January –  17 February 2018 to raise public awareness about issues concerning natural resources, alternative agriculture, health assurance, and the exercise of rights and freedoms. We plan to walk from Bangkok to Khon Kaen. And since 17 January 2018, the officers at the KlongLuang Police Station which has jurisdiction over the starting spot have been notified of our intention as required by the 2015 Public Assembly Act. On 19 January 2018, a reply from the police officers has been received in which the authorities, however, claimed they had found during the activity there was going to be a sale of T-shirts bearing words with political connotation and general public would be invited to sign a petition to have laws annulled. In the authorities’ views, such walk is not a public assembly under the supervision of the police. Rather, the police claimed our activity is tantamount to holding an illegal assembly or a political assembly which is prohibited by Article 12 of the Head of the NCPO Order no. 3/2558, and it could be punishable by up to six months of imprisonment and fine of not more than ten thousand baht, or both. The undersigned human rights organizations have the following opinions to make;

With the above reasons, the undersigned human rights organizations demand the authorities stop invoking the Head of the NCPO Order no. 3/2558 and respect the right to freedom of expression and peaceful assembly. The authorities are also urged to support the organizers of the event, participants and general public as prescribed for in the 2017 Constitution of the Kingdom of Thailand and the 2015 Public Assembly Act. 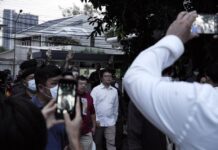